Negligence At Construction Site Can Lead To Serious Accidents

As a construction worker, you often placed in situations of risk daily basis. In addition to working with heavy machinery, on scaffolding, exposed to hazardous materials.  Timelines can often force contractors to complete jobs rushing to deadlines. These risks can lead to serious negligence on-the-job accidents that can put you out of commission for days, weeks, months, or potentially, forever. Construction is a high-risk industry and construction site fatalities and injuries are substantially higher than the national average, according to the Occupational Safety and Health Administration (OHSA). If you have an accident Lawyers with an Edge can help you sort through events help you evaluate your case.

In 2014, a total of $36 billion was spent on construction activities in New York while the number of new building permits issued this year has already exceeded those from last year. Construction remains one of the busiest and most dangerous economic segments in the city.

Pedestrians and bystanders are also at risk from construction-related accidents. 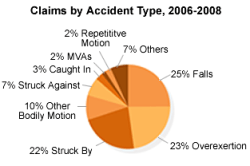 According to the New York Labor Law (and in particular a section commonly known as the Scaffolding Law), injured workers can file lawsuits against property owners or contractors because they failed to provide proper safety equipment.

If you are hurt badly at work, your first resort is to file for workers compensation. But, workers compensation benefits are almost always inadequate. Your only other recourse to get the compensation you need, and deserve, may be to file a lawsuit against the party, or parties, responsible for your situation.

Determining liability for your injuries can depend on many factors and last for an extended period of time. Also, you will need to determine with whom the fault lies (the site owner, contractor, subcontractor, equipment manufacturer etc.). For the most part, the available options for the injured party are determined by the state in which the accident occurred.

Considering all of the above, hiring an experienced New York construction accident lawyer to protect your legal rights, provide you with proper legal representation and help you in getting the deserved compensation would be a good decision to make.

The construction accident lawyers at Gurfein Douglas in New York are not afraid of a challenge. A seasoned construction accident lawyer has to be able to carry out a very meticulous reconstruction of the accident and have the ability to explain detailed technical findings to a jury. We, at Gurfein Douglas, pride ourselves in being experienced, fastidious and not stopping until our clients get the justice and the compensation they deserve.

The majority of serious accidents at the workplace usually involve equally complex principles of science and engineering. Apart from law degrees, our firm’s principals Richard Gurfeinand Preston Douglas also have degrees in engineering and biochemistry which gives them an edge over other motor vehicle accident attorneys in New York. At Gurfein Douglas you can rely on the scientific training of our two partners to uncover the often hidden technical details of your construction accident lawsuit that the untrained eye might miss.

Here are some examples of the settlements awarded for on-the-job construction-related injuries:

Another construction worker was injured on the site in the Bronx, New York when he tried to reach the scaffolding platform via the cross braces which was the only access point. He fell and, as a result, severely injured his knee and a shoulder and broke four ribs. Consequently, he could no longer work. The site was operated by the New York City School Construction Authority which was ordered to pay $2,871,200 in compensation to the worker. The jury concluded that the School Construction Authority did not adhere to the state code and failed to provide proper access to the platform.

A 47-year-old construction worker fell from erected train tracks while working on the Brooklyn-Queens expressway in New York City and suffered serious spinal cord injuries requiring two risky surgeries. His attorneys subsequently filed a lawsuit against the contractor – the Queens County – and several other defendants, and the worker was awarded $1.5 million.

A 30-year-old man was working on the number 7 subway extension project in Manhattan when a tattered cable snapped and a huge tractor crane collapsed on him, causing his instant death. The worker’s parents sued the contractor and were awarded a tax-free settlement of $1 million.

One of our more successful cases involves a $3,100,000 judgment recovered by a 27-year-old maintenance worker who used an unsafe lift machine to go up 12 feet from the floor.

Another one of our cases involving an electrician falling off a faulty ladder and severely injuring his knees obtained a $915,000 settlement.

Tell Us What Happened